“But God protects fools and drunks, and we were certainly both foolish and drunk much of the time.”

Homemade macaroni and cheese topped with crumbles of bread.

In the “First Course” of Kitchen Confidential, Anthony Bourdain serves up a tale of his early culinary life. From the first taste of cold soup just after fourth grade to his graduation (and early successes) from culinary school, Bourdain’s image of the chef and life in the professional kitchen is, in a word, sensational. Bourdain’s descriptions of cooks strike me as something akin to describing all journalists as Hunter S. Thompsons (who, coincidentally, was an early idol of Bourdain’s, to absolutely no one’s surprise), but the idea that life in the kitchen could be so exciting certainly wooed this reader.

Admittedly, while I’m likely a bit too sober for the lifestyle of the chef, Bourdain may have me almost (just almost) regretting my choice of major.

However, Bourdain’s loving descriptions of food hit close to home: as someone deeply fond of food, this decadent, nigh-lurid list of dish after dish is positively sinful. But, not all of Bourdain’s dishes turn out perfectly.

No, just like the rest of us, Bourdain is all too human. From his humiliation by Tyrone, who, “with one naked hand, picked up a glowing-hot sizzle-platter” that Bourdain had dropped, to a dish so hot that they “could hear the muffled wails of pain from the next room,” even a now-world-famous chef has his misses. Personally, these failed foods make up some of my favorite parts of the book. We all have had that bad dish or those burned snacks—there’s always the chance of something going wrong.

In fact, one of these disgracing dishes nearly sent me away from the kitchen for good.

Until I was thrown to the waters that are college and had to learn to sink or swim, spending time in the kitchen meant grabbing pre-cooked food or, if I were feeling particularly adventurous, a bowl of ramen. (One friend, despite my assertions that I can cook, I swear I can, has a need to remind me of that one time I set off her smoke alarm boiling water.) My fear of cooking—specifically of at best burning myself or at worst setting myself on fire—knew no bounds at the time.

And then, my sister got in trouble at school while my mom was cooking dinner.

I’ve long forgotten the circumstances of what my trouble-making sister did to get a parent-principal conference, likely in lieu of the trauma of that fateful afternoon. I remember the meal all too well: baked chicken, glistening with sauce and ready to go, and a box of macaroni.

“Just watch the oven, make sure you do this or it’ll burn, and follow the instructions on the box. I’ll be home soon.” And then, she swept out the door and left me, a middle-schooler with no experience, no idea what she was doing, and no one to answer my myriad questions.

It was sink-or-swim time, and boy did I sink.

In the end, I managed to burn the chicken, completely confused by my mother’s directions. The box of macaroni ended its short life in our home in the garbage can, unfit for human consumption. My mom definitely wasn’t pleased, expecting that good grades meant of course her daughter was smart enough to work an oven, and we finished the meal together once she returned. Afterwards, however, I left the kitchen in disgrace, vowing that I’d never cook again.

I was a liar, obviously, but admittedly, I’m a good bit older and a good bit less fearful of flying grease and hot pans.  Now that I’ve grown a bit, I think it’s time to revisit good old macaroni and cheese, as well: creamy, cheesy, perfectly gooey macaroni and cheese. It’s nothing like the masterpieces you might see in Bourdain’s kitchen, sure—but it’s not the Kraft Katastrophe™ of my youth, either. Here, I’ve taken a homemade macaroni and cheese recipe, something a little closer to gourmet than your average macaroni and cheese, in hopes that maybe I’ll rise from the pit of disgrace I put myself in all those years ago, much like Bourdain “made them pay” with his own newfound expertise. 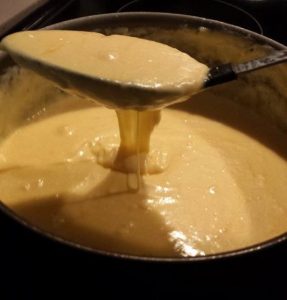 Melting cheese for the final product.