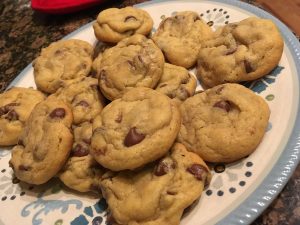 When I was a child, I was – often to my parents’ exasperation – obsessed with learning about how to do “grown-up” things. I would climb into my mother’s lap while she booted up AOL, giggling at the funny sound of dial up and watching her fingers fly across the keyboard as she composed emails for work. I would follow my dad around and watch intently as he washed his truck, always trying to help out even though all I could reach were the tires. I even insisted on helping feed the dogs, even though the bowls were about half the size of me at the time. That being said, it’s no surprise that I was also very curious about how things worked in the kitchen.

My mother has always been a very traditional southern cook, and I was certainly no picky eater. By the time I was four or five, I began to wonder where all of these wonderful things like chicken and dumplings, sweet potato casserole, country fried steak and gravy, and peach cobbler came from. I carefully watched my mother dredge thin green tomato slices in meal and flour or chop potatoes into hearty quarters for a roast, usually begging to help and pouting every time she said I wasn’t old enough. One Saturday morning when I was about six or seven, I suppose my mother had either gotten fed up with my nagging or finally decided I was old enough to help, so she pulled up my little stepping stool to the foot of the stove, smiling at me and fishing a skillet out of the cabinet. “How do you feel about scrambling the eggs for us this morning?” she’d asked, fishing enough eggs for our family of four out of the carton. I nodded vigorously, rolling up my pajama sleeves. I was ready to get to work. “Everyone needs to know how to cook an egg,” my mother told me as she demonstrated how to crack one on the side of the skillet. “It’s one of those staple foods.” I looked on in fascination, a spatula clutched tightly in my small hand.

It turns out that my mother isn’t the only one that believes in having certain staple items in one’s culinary repertoire. In the “Virtue” chapter of Anthony Bourdain’s Medium Raw, he wishes to establish a baseline set of culinary skills as a new human virtue. He questions his readers: “What simple preparations, done well, should be particularly admired, skills seen as setting one apart as an unusually well-rounded, deceptively deep, and interesting individual?” Bourdain goes on to list what he views as the essentials when it comes to preparing things in the kitchen: chopping an onion, roasting a chicken, cooking vegetables, mashing potatoes, shopping for produce, grilling a steak, steaming rice, and yes, cooking an egg. Though some of Bourdain’s “staples” seem a bit far-fetched for the amateur chef, such as steaming a lobster or making beef bourguignon, he does make a fair point. As he states at the beginning of the chapter, it is almost always cheaper and healthier to eat at home, and learning some of the basics from the list above is a great place to start for anyone who’s unsure in the kitchen.

Though the majority of Bourdain’s list is difficult to argue with, I can’t help but feel that he’s left a few things out. What about dessert? Though not a staple on a meal-to-meal basis, everyone ought to know how to make a few basic treats for themselves and their friends from time to time. For example, everyone should know how to bake a pie. It doesn’t matter what kind of pie – apple, pumpkin, chocolate, pecan, key lime, coconut – any will suffice. Find yourself a homemade cobbler recipe using fruit that you love, and get it down pat.

But perhaps, most importantly, learn how to make a good cookie from scratch. 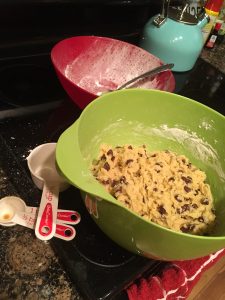 Cookies are perhaps one of the most universally loved desserts, as well as one of the easiest to make. Almost everyone loves a good chocolate chip cookie, and they work well for so many different occasions: tailgates, sleepovers, office parties, or just a weekend treat for yourself. Though it’s tempting to buy the pre-made dough from the store and just throw it in the oven and go, I’ve found it’s always much more rewarding to use your own recipe and mix up the dough yourself. The one listed below, which I’ve used for the past several years, may seem like too much hassle, but I’ve always found it’s worth the tired arms from stirring the stiff dough, the wait while it chills in the fridge overnight, and the torture of keeping yourself from eating all of the raw cookie dough before it’s baked. There’s nothing like biting into a warm, chocolate-y cookie that’s chewy around the edges and soft in the middle. Though it’s not a staple that Bourdain thought worthy of his own list, it’s a staple that everyone you know will thank you for. 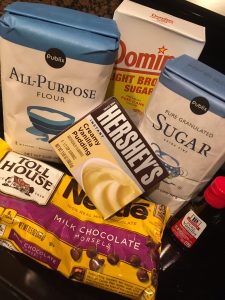