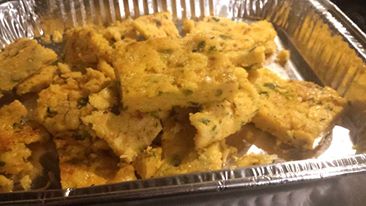 In Bryant Terry’s article “Reclaiming True Grits,” he claims that, in the past several decades, soul food has become synonymous with comfort food—fried chicken glistening with grease; starchy, creamy macaroni and cheese; and, of course, grits, typically instant—and many in the African American community are suffering for it. However, this soul food, the sort romanticized by food writers, is not the soul food of tradition, but what Terry calls “instant soul food” and “a dishonest representation of African American cuisine.” It’s the food you find on a Cracker Barrel plate, not a traditional Southern meal.

These over-simplifications and exotic ideas damage the memory of what soul food really is (spoiler alert: it’s not the buttery dishes served up in Paula Deen’s kitchen), and this in turn damages the health of those consuming it. In the words of Terry, “soul food is good for you,” and he’s not talking about the spiritual benefits. He describes these traditions from his own memories: “lightly-sautéed okra, corn, and tomatoes recently harvested from the [grandparents’] ‘natural’ backyard garden in South Memphis,”; “butchered-that-morning herb-roasted chicken”; and, of course, ‘grit-cakes.’”

Terry acknowledges that the health issues so prevalent in the African American community aren’t just attributed to the “instant soul food” so easy to find in the South; health, after all, comes from a variety of factors. However, food does make a difference.  Adding a little of “the same grit that carried our ancestors through the worst of times” could make all the difference in the health of Southern food, particularly in the health of the African American community.

While I am not part of the African American community, Terry’s descriptions of traditional soul food revived plenty of memories of life and food in the South from my own childhood. Growing up in the South, all those comfort foods made up a large (probably too large) part of my early life, but so did the greener eating. My great-grandparents kept a garden into their 80s, and I remember walking through the rows of corn and beans, heavy with that night’s dinner. My great-grandmother spent hours on the porch, peeling peas into a huge metal bowl with purple-stained fingers, guiding all her grandchildren and great-grandchildren through the process. Even today, I get fresh produce, not from the farmer’s market, but from my grandmother, who loads us up with so many tomatoes and peaches that we often turn to neighbors to take some before they go bad.

Of course, those less healthy treats are popular for a reason (don’t ask me to give up fried apple pies). But, as Terry states, these aren’t the soul food staples that make up the Southern and specifically African American diet. They’re present, but there’s more to soul food than fatback and fruit cobbler. Now, for the sake of those that don’t know about the healthy soul food of the South, maybe it’s time to give them a little revisit.

In his article, Terry provides a recipe for the grit cakes he so loved from his own childhood. Here, I hope to recreate this savory dish, good for breakfast, lunch, or dinner, according to Terry.

(Note: This recipe was originally attempted as listed in the book, to include thyme, cayenne pepper, spring onions, and garlic. After attempting this on Saturday, my kitchen still reeks of some particularly pungent produce. It is now Monday. If you would like to enjoy a stronger version of this dish, sauté spring onions and garlic together, set aside, and add them after step #2, as listed, below.) 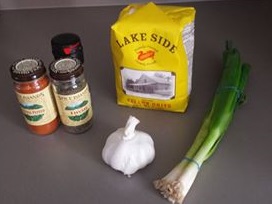 Ingredients for a batch of pan-fried grit cakes