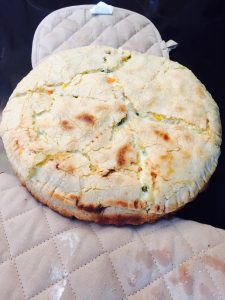 “Tradition is not reproduced. It is thrown and it is caught. It lives a long time in the air.”    — Leon Wieseltier

In “Cooking the Kaddish,” Susan Gubar references this quote as she reminisces on family tradition. Gubar reflects on memories of her mother’s chicken soup as a way of embracing her cultural inheritance while she teaches herself the mourner’s Kaddish; or, rather as a way of procrastinating learning the mourner’s Kaddish. As Gubar mindlessly goes through the steps of preparing the chicken stock for her mother’s recipe, she repeats the second line of the Kaddish “B’almah dee-v’ra chiru-teh.” As she peels the skin from the chicken, “B’almah dee-v’ra chiru-teh” begins to sink in. With each ingredient and new line of prayer, Gubar is reminded of her childhood. She thinks back on family traditions of Grandma Alice’s German food on Friday nights or Mr. Levy’s battered attaché on Sunday evenings. Gubar parallels the traditional Jewish recipes with the sections of the prayer as she goes along.

Much like Susan Gubar, I utilize my mother’s recipe as an exercise of memorization. In middle school, I began asking my dad to help me study for history. Our family has always been big “history buffs,” as we like to call it, and I figured it would be fun for him to help me learn the material. I would quickly learn that he did not enjoy it and I, in fact, would not be included in the category of “history buffs” in the family.

I would start reviewing my notes after a long day of school followed by an even longer day of sports practice. When I felt I was prepared enough, I would walk into the living room, where Dad would have on the news in the background while he read the paper. I’d ask him to call out questions to me for my test on the Civil War. Without even looking up he’d ask, “Do you know it?” I would hesitantly reply, “Well I think so.” He would reluctantly ask the first question, “Name three major generals for the Union.” I would begin to smirk and reply confidently, “Ulysses S. Grant, Mcclellan and Sherman.” He would then ask a more detailed question, which, I would delay my response having to think about it, and suddenly, he would chuck my papers onto the coffee table and tell me to go study some more, “You don’t know it.”

Here we go again, I would think to myself. I would realize there is no point in arguing and quietly gather my notes and walk into the kitchen feeling defeated, much like Gubar would in trying to remember the first line of her print-out of the prayer for the dead. 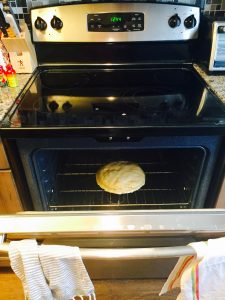 As Susan Gubar puts it, “It takes time to make soup and apparently it will take time to get “B’almah dee-v’ra chiru-teh” into my thick head.” I agree, but substitute “B’almah dee-v’ra chiru-teh” with “the Civil War.” As my mom would prepare the ingredients for the delicious, creamy potpie, she would call out questions to me. Unlike my father, if I would answer incorrectly she would simply stop preparation, highlight the question, and ask me again later.

As I would watch my mom shred the pieces of chicken, I would recount the battles of the war. With each piece of tender chicken peeled apart, would come a war. There was First Battle of Bull Run 1861, Shiloh and Antietam 1862 and Gettysburg in 1863. Next would come the mixing of the vegetables, which meant a term defined for every vegetable.

As the preparation for the chicken potpie came to an end, so did the studying. By the time the potpie was browning in the oven, I had retained all of my notes and was ready to prove Dad wrong. But after a few history tests, this became a ritual for my parents and me. I would always have to go to my mom and it would always be her chicken potpie.

As Susan Gubar recounts her childhood memories of correlating cooking with learning her cultural tradition, I am reminded of the different ways in which cooking serves as a custom for others. Cooking is no longer just about the process of providing yourself with the necessary sustenance for the day. It is used in fun and creative ways that surpass the basics of survival. Susan Gubar’s use of cooking reflects a tradition that she made all by herself and will always remember just as I will always remember retaining history terms through the use of mixing ingredients.

Take the piecrusts out of the freezer to thaw. Mix the sour cream and cream of chicken soup in a mixing bowl. Once mixed, add the green beans and Veg-All. Add the ½ teaspoon of pepper.

Peel the skin off the chicken and shred the chicken into small pieces. Preheat oven to 350°F.

Mix the ingredients together and carefully pour into the deep-dish piecrust. Lay the other deep-dish atop the filled piecrust and gently pinch the edges together.