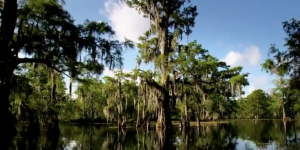 “True noble animal, I hope you felt no pain.”

In the “Cajun Country” episode of Anthony Bourdain’s television program No Reservations, he seeks to discover the roots of the Cajun people of Lousiana. Bourdain travels to New Orleans to see the birth of jazz and the resurrection of classic cuisine. On this expedition Bourdain paints a vivid, sometimes disturbing, picture of what life in Louisiana looks like without its sequins.

Bourdain asks Lolis Elie, a New Orleans native, “Why should anyone give a shit about New Orleans?” Elie answers bluntly, “New Orleans still has a regional culture. In much of the rest of the country, you ask them what kind of food they eat and they say McDonalds or Burger King, you ask them what music they listen to? They say whatever is top 40…We are an example to rediscover those things about themselves… we celebrate them here and I think you should celebrate them wherever you are.”

As Elie says, in New Orleans there is a collision of cultures, races, and flavors collected from sea to sea. Traditions are preserved in time through the appreciation of what made these people who they are. Modern cuisine, like music, is simply a variation of what has come before it. Without truly appreciating the roots of food or music, one can’t expect to comprehend a culture. The types of music played and the varieties of foods served catalyze social gatherings. 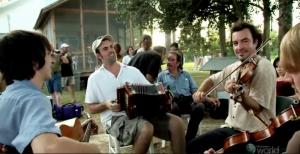 Through talking with many locals, Bourdain discovers a small town two hours out of New Orleans where as often as they can, the community comes together to host a “boucherie”. Quite literally, a boucherie is the French word for a butcher. Bourdain casually says its, “a big back yard, a little prep, and a little music.” This backyard bash is like nothing I have ever seen before. The community comes together like cogs in a well-oiled machine. With seemingly no vocalization of instructions every man, woman, and child understands their specific role in the boucherie. Only the sweet sound of eclectic music, hearty laughter, and a friendly disagreement about the proper way to prepare a road-killed turtle fills the air.

Before the men descend upon the traditional pig, Bourdain is elected to deliver the deadly blows, and the community members bow their heads to recite the Lord’s Prayer. Teaching an understanding of and appreciation for where food, specifically meat, comes from is paramount to the preservation of the Cajun culture.

Bourdain initially makes a faint objection to murdering the pig, but the men of the community quickly make a crude joke about what they will call him if he declines. Bourdain responds, “I think it’s appropriate ethically, given that I am eating the pig, that I should be complacent with murdering it.”

Immediately after the pig has been shot, the men jump into action dividing the different cuts, organs, and even blood to different stations. Children closely observe the adults’ work, learning what needs to be done to preserve the integrity of the culture for another generation. Every single inch of the pig is utilized to serve the community in some way.

Is this what it means to eat ethically? Is there an importance to understanding how animals become meat? If so, where is that transition? When does a living, breathing animal become a chunk of meat on a plate? Bourdain believes, when the hair comes off and the first cuts are made, the pig becomes pork.

Until very recently I hadn’t formed an opinion about this question of morality. I had never witnessed the last breath leave a living creature. I, like many children around the world, compartmentalized animals from the plastic- wrapped slices of meat found on aisle seven.

Being a chatty, teenaged girl, I wasn’t allowed to attend annual hunts with the men in my family. I was instructed to wait at home until the slaughter was over. Finally, a month or so ago, I was invited to go duck hunting in Mississippi. We sat in the blind and the first shots were fired. The duck was struck, but didn’t die— they wrung its neck. I wasn’t prepared to see its wings continue to flap.

I constantly struggle with the ethics of killing animals for food. However, to witness with my own eyes the duck fly over the blind, hit the water, and be stripped of its flesh to be prepared for dinner that night, changed my perception of meat forever. I have a new appreciation for both the hunted and the hunter. To be able to see the hunt, to see the entire process made sense to me, it wasn’t just shooting fish in a barrel, but it was truly an art. Just like the pig that Bourdain shot for the boucherie, the duck didn’t suffer. It died humanely and for a purpose. I can now more easily relate to Bourdain after participating in the hunt. He says, “Any one who makes anything worth eating respects their elders, you know, respects the ones who came before them. Because without that, we are no where.” Seeing the process with my own eyes taught me a new respect for the animal, and those who for generations kill to provide food for their families. It isn’t for the joy of killing, but the memories that come from the food provided graciously by the animal.

I can no longer ignore the fact that my steak once ate grass, my pork once wallowed in mud, and my fowl once migrated thousands of miles to warmer weather. My formerly romantic view of aisle seven will never again be the same. Although I still don’t know whether I could take the life of an animal, I now know how to hunt humanely and properly prepare a fresh duck.

Wild Duck with a Raspberry Sauce