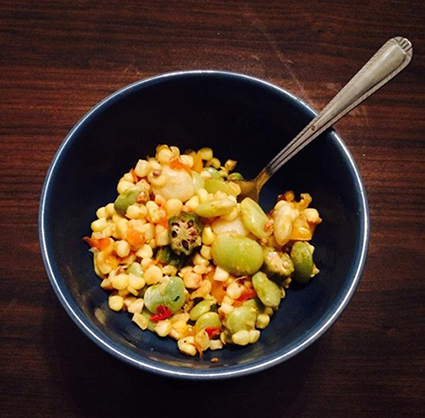 I can imagine that being the First Lady of the United States comes with some benefits. For starters, you get to live in one of the most iconic houses in America, and maybe become close friends with a celebrity or two (Beyoncé, anyone?). Of course, another incredible perk of the position is the opportunity to pursue your own political platform. So while her husband has been busy healing our relationship with Cuba and amending our healthcare system, among other things, Mrs. Obama has brought about great changes as well. One of her programs is the Let’s Move! initiative, which promotes exercise and healthier eating for the youth of America.

In “The Business Case for Healthier Food Options,” an opinion piece written for The Wall Street Journal, Obama lays out some of the positive results of the Let’s Move! campaign. For example, as of the piece’s publication in 2013, Walmart “has cut the costs to its consumers of fruits and vegetables by $2.3 billion” and several states have seen “measurable declines in childhood obesity.” The First Lady even quite literally brought her work home with her when she began growing a kitchen garden at the White House, which she wrote about in her book American Grown. Her experiences in her garden gave her a new appreciation for the process of food production and the importance of fresh, local options.

I am happy to admit that I share Obama’s penchant for gardening. All through high school I kept a small hobby garden in my backyard. Digging into the dirt of my vegetable patch became my go-to cure for a stressful day of classes, practices, and work. Even the hours of work turning my bed in the sweltering Mississippi heat couldn’t bring me down. I guess I took comfort in the fact that the same sun shining down on me then would soon bring new life from my small patch of dirt.

I use the phrase “small patch of dirt” intentionally since my garden was certainly a modest one, but it was entirely mine. It was a simple 6’x3’x1′ raised garden bed that I built myself. The greeter at my Walmart’s garden center started calling me by name after my third trip to buy topsoil, compost, and manure to fill the bed that first year. My friends were stunned when I passed on our Saturday frisbee games to plant my seeds. But a week later when the first few sprouts broke the surface, I couldn’t help but feel pride in the fruits of my labors. Because of the small size of my garden, I never grew very much, just a few plants each of corn, tomatoes, peppers, watermelons, and okra. However, a few of my crops thrived on the Deep South heat and produced a sizable harvest. At their prime, my okra plants produced so many pods that I had to cut some from the stalks every day of the week, and fried okra became a staple side at every family meal. On the other hand, almost all of my watermelons were lost one year when my dogs found out that their teeth were strong enough to chew through the rind and get to the fruit on the inside. My garden definitely had its ups and downs, but it taught me that the food we see at Walmart doesn’t come out of thin air–a lesson that I’m sure the First Lady also learned during her own garden project.

When trying to decide on a recipe to accompany this post, I immediately jumped to my tried-and-true fried okra. However, that didn’t quite make the cut. Don’t get me wrong, I love fried okra, but I imagined a plateful of barely recognizable brown cubes and decided I wanted something with a little more pizzazz. So I settled on an adaptation of a succotash recipe from an issue of Cook’s Illustrated. The staples of succotash–corn, lima beans, and sometimes tomatoes–were all crops that I grew in my own garden back in the day, so it seemed like a perfect fit. I added in my beloved okra and a few other things to give the recipe a bit more of a personal touch. The best part about this recipe is that each of the vegetables can be fairly easily grown at home, and that means any home, including the White House. Adapted from a Cook’s Illustrated recipe by Eva Katz.