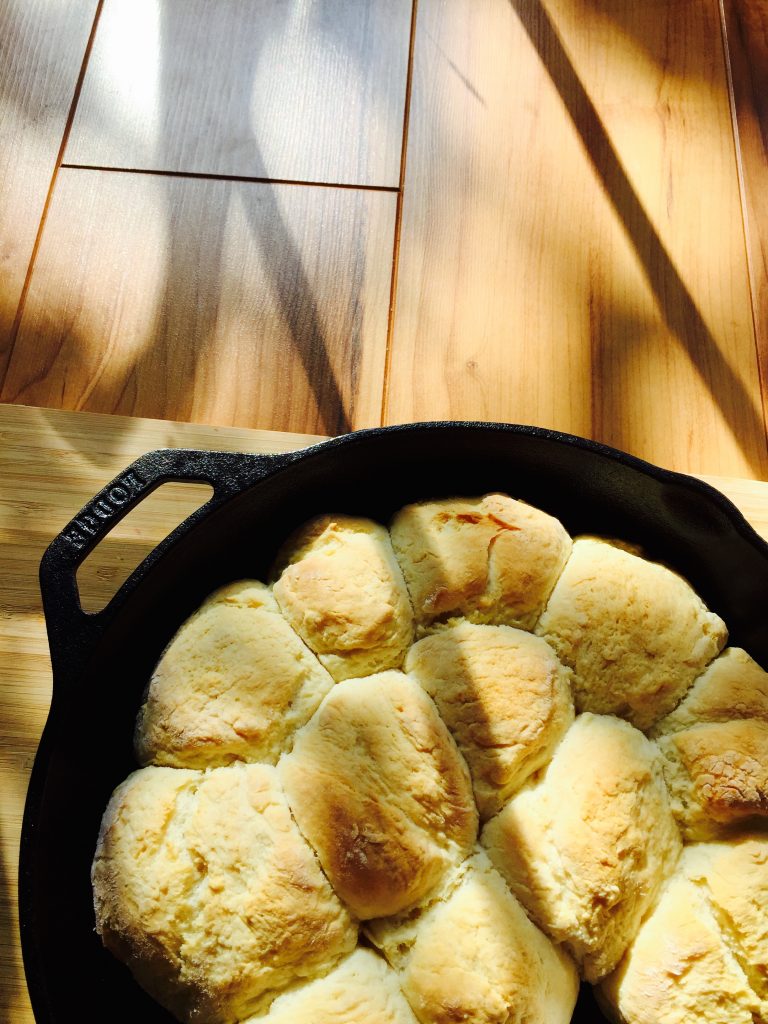 The food industry has come to a consensus: Everyone is cooking less and eating worse. Nutritionists, chefs, farmers, gourmands, productive home enthusiasts, hipsters in the granola aisle of Whole Foods–everyone agrees that there is an epic food fight being waged in our homes. Unfortunately, the rhetoric used to combat this trend is often laced with blame and judgement. “Cook all three meals.” “I hope those eggs are cage free.” “Don’t waste money on organic avocados.” You bought non-organic strawberries? Here’s a shovel. You’ll need it to dig the grave all those pesticides are going to put you in. Think fast: there’s a Chinese takeout container full of shame and guilt flying right at your head.

Within this milieu of confusion, good intentions, and more than a pinch of guilt, it is tempting to side-step the minefield that cooking can become and outsource the decision of what’s for dinner to restaurants and corporations. Erica Strauss addresses this temptation, and why she resists it, in a post entitled “Zombies vs. The Joy of Canning: Motivation in the Productive Home.” She hits upon a refreshingly simple and unpretentious reason for fighting against the cultural norm of take-out and microwave dinners, as she admits, for making life harder: It makes her happy. As frightening as the threat of a zombie apocalypse or satisfying as taking down big business one organic cantaloupe at a time may be, she comes to the conclusion that, “At the end of a long, long, long day of canning, or weeding, or sowing, something greater than fear and anger has to carry you along.” I think she’s right. If you’re going to spend a full weekend canning tomatoes as she does, I hope to God it’s because you find enjoyment in it. And if you do, then congratulations, because being happy and healthy is an excellent by-product of that hobby.

It’s important to note though, that the way of life Strauss has chosen is a hobby. Some people love taking pictures, or playing music, or cooking tiny, ant-sized versions of popular foods (miniature cooking is a thing, and it is weirdly satisfying). Erica Strauss loves making her own deodorant, and harvesting honey straight from the hive.

That’s great for her, but for most of us it’s impractical at best and utter drudgery at worst.

Luckily, there’s no need to devote your life to creating a productive home if that’s not something that tickles your fancy. There’s a middle-ground between making your own jam and having the Mexican place down the road on speed-dial. For me that means that if I’m running low on time and energy when dinner rolls around, I don’t feel bad about occasionally pulling a plebeian tin of canned vegetables out of the pantry. That said, I think it’s still worth capturing some of the enjoyment and satisfaction Strauss describes by doing a little “balls-to-the-wall, from-scratch cooking” every now and then.

My favorite place to put in that extra effort is at the breakfast table. I love cooking breakfast for my family on Saturday mornings, and whether I’m dropping pancakes onto a warm griddle or frying sausage in my mother’s perfectly seasoned cast-iron skillet, I usually try to whip it up from scratch, like a modern Betty Crocker, only without much actual culinary know-how. This labor of love breakfast is a new tradition in our household; my mother’s idea of home-made biscuits is taking them out of the freezer and putting them into the oven. The truly home-made food always tastes better, but I think my family sometimes wishes I wasn’t dead set against shortcuts. For while I am an ambitious cook, I am not a fast one, and often what was intended as an early breakfast turns into brunch.

It’s about the process y’all.

These days one of my favorite breakfast recipes is for big, fluffy, biscuits. They’re sturdy enough for any topping you want to smother them in but they’re flavorful enough to be the star of the show all on their own. Bonus points: they taste best when cooked with bacon fat, so you have a built in excuse to ignore any studies about the dangers of that succulent indulgence. They’re time-consuming to make if, like me, you prefer scratch cooking to be a languorous experience, but throw on a podcast (I like America’s Test Kitchen and Radio Lab) and it will feel like time well spent. For you at least. Once the bacon starts crackling you’re family’s going to start wondering how long they have to wait for that satisfaction Strauss talks about. Add 1 cup flower and mix with fork until mixture resembles porridge. Press fats against the sides of the bowl to cut into smaller pieces.

Fold in remaining flour by the 1/4 cup until a wet dough forms. Turn out dough onto a very well-floured surface. Dust top of dough with flour and knead, incorporating more flour as needed, until dough is soft and pillowy and no longer sticky. Divide dough into 12 or 6 equal pieces using a floured bench scraper.

Dip cut sides of each piece into flour and gently role into a ball. Place each ball, with sides touching, in a cast-iron skillet. Brush with melted butter and bake until lightly browned 25-30 minutes.

Combine all ingredients in saucepan and cook, stirring, over low heat until butter is melted. Drizzle over biscuits or toast.