Nestled between the red brick and white pillar “old south” aesthetic of The University of Alabama, and the slightly more modern downtown Tuscaloosa, lies the unassuming Surin of Thailand. Surin originally opened in Atlanta in 1990, but has since found a home on The Strip in Tuscaloosa, Alabama. This restaurant chain features a collection of self-proclaimed authentic Thai cuisine and sushi options that still feel very approachable to college students and Tuscaloosa natives alike. Patrons can order anything from Thai curry to vanilla bean crème brulee. Surin makes no claims about famous chefs or innovative menu items but does promise “Master Thai Chefs,” fresh ingredients, and an impressive martini menu– all of which fall within the typical college student’s budget.

Students do serve as the most frequent patrons for the strand of restaurants lining University Boulevard on which Surin falls, but it does include more than just burgers and beer. And what makes Surin stand out from even the more adventurous dining options so close to campus is the effortlessness with which it fluctuates between upscale dinner date restaurant and cheap, crowded, classic college experience. I am referring, of course, of Midnight Sushi. Every Thursday through Saturday, Surin reopens from 11pm-1am and offers patrons a modified menu featuring small portions– think two pieces of sushi or one egg roll– at prices as low as $1. While there is much more to Surin than the experience of Midnight Sushi, its local fame comes from this quirky process and thus I will continue to focus on it in this review.

Regulars like me begin lining up as early as 10:00pm. Around 10:45pm, staff members venture outside into the crowded line (which usually wraps all the way around the restaurant) to collect party names and numbers. Once the doors open, a rush of organized chaos ensues as patrons lucky enough to be seated right away file in, pausing only to acquire wristbands from an intimidating bouncer-of-sorts skeptically checking IDs. The physical atmosphere remains consistent between normal operating hours and Midnight Sushi: dim lighting, exposed brick, tasteful East Asian decoration, a few high-backed booths on the outskirts of both heavily- tabled halves of the restaurant– split down the middle by an even more dimly lit bar. The only major difference is that during this time, large sheets of white butcher paper cover the white tablecloths. Guests use provided pencils to mark how many of each dish they would like on combination menus/order sheets. These yellow, rectangular half-sheets also have spaces to write down the table and seat numbers assigned to guests by their server. After servers collect hurriedly filled out, pencils begin to find their way to the paper table coverings where scribbling is encouraged.

Because Midnight Sushi is such a process, service definitely feels nontraditional. The wait staff moves quickly and expects that most patrons have “done this before,” but it is still difficult to bring food in a timely manner when so many people place orders in one nonstop, two-hour window. My friends and I usually order between three to six small dishes per person, and each one comes out in waves on its own small paper or ceramic plate. There have been a few instances in which one person had to wait for the next round of sushi or egg rolls after all the other plates arrive. Service does run rather slowly, but I am usually happy to be out of line and drawing on my table, so it never feels unbearable. The entire process usually takes about one and a half hours including line time, so it is possible to in fact be leaving Midnight Sushi just before midnight, depending on when you get in line and how well you know your order. Six other regulars accompanied me on my most recent trip to Surin and we made it out by 11:53pm with our usual combination of satisfied fullness and utter exhaustion. 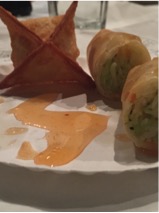 The first dishes brought out that night were the crab angels. A personal favorite of mine, these greasy, fried wontons are filled with a rich white glob of crab and cream cheese. As usual, the odd pointed shape made my first bite a bit difficult, but when the crispy shell gave way to a thick, sweet and fishy center that slowly coated the inside of my mouth, all was forgiven. I am not sure how “authentic” this dish is in Thai cuisine, but it is always one of my favorites. I eat it slowly in small, careful bites– often as a refuge from the impossibly hot vegetables inside the flaky egg rolls that I can never seem to wait long enough to dig in to.

The next round that night featured sushi and maki. I first used my chopsticks to clumsily pick up a piece of Kaboom Maki. A pale orange panang curry sauce accompanied my flash fried and golden brown roll of shrimp tempura, cucumber, and cream cheese. I found the creamy, citrusy sauce a bit unpleasant and unnecessary with the roll that already balanced the heaviness of rich seafood flavors with bright, crunchy vegetables. However, this issue was easily addressed and the maki itself was wonderfully both savory and fresh. Additionally, Surin’s sauce choices were redeemed in the tangy, translucent, bright orange sauce that accompanied and undercut the earthy flavors of my Rock and Roll (which also tastes great with the aforementioned crab angels). In this dish, avocado and freshwater eel are tightly packed into a roll of soft rice and tender seaweed. Both plates come with a dangerous mound of wasabi and small pile of tender ginger. I am not a fan of either and thus left them untouched. The small portions at Midnight Sushi did leave me wanting more of each dish, but they are great for sampling a wide variety of foods and for attempting to not eat a fourth full meal at 1am. 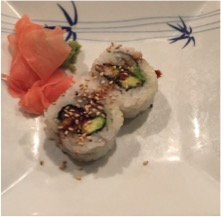 Because we were celebrating my twenty-first birthday on this particular trip to Surin, I also ordered an Electric Peach Funtini from the rather impressive (if a bit silly) martini menu. My drink was pleasantly bright and fruity with a beautiful light pink color. Its place on the menu and next to my chopsticks seemed to aptly capture the juxtaposition of Thai authenticity and college appeal that Surin balances so well.

By the end of the night, our table was full of small plates that once held one small menu item, chopsticks abandoned after the first five minutes, and poorly drawn portraits covering the paper tablecloths. Tables probably looked rather different the next afternoon when patrons were served full portions on finer dishes, but I have visited Surin once during normal business hours and found the overall quality of the food consistently good. While college students do dominate the Midnight Sushi demographic, Surin of Thailand can be a wonderfully approachable adventure into unpretentious Thai cuisine for a wide variety of patrons.