Epiphany, a farm-to table restaurant serving what it calls “new American cuisine,” has established a niche in Tuscaloosa’s foodie market. Since its opening in 2009, Epiphany has served fresh and creative dishes in a high-class but comfortable setting. Exposed brick and immaculately clean glass doors emphasize the rustic, farm-fresh qualities of the restaurant, and the ever-shifting menu and tastefully quiet indie music appeals to the environmentally conscious foodie crowd. Executive chef and owner Tres Jackson has expressed the desire to use his thoughtful and locally based restaurant methods to promote ethical eating for customers and the community. 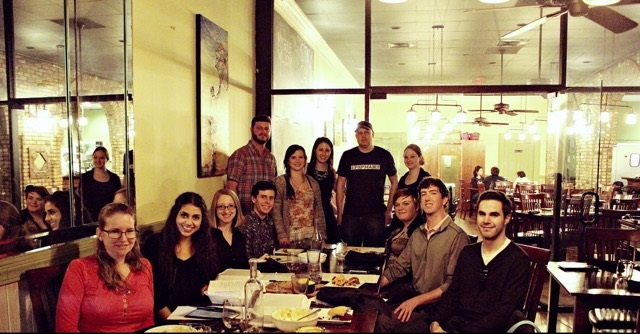 Members of the class with Executive Chef Tres Jackson at Epiphany

As Epiphany has met with consistent success, Jackson is looking to expand the reach of both his impact and his innovative food creations. He, with Epiphany’s chef de cuisine Joel Frederick, plans to open an international street food restaurant entitled Animal Butter (presumably acknowledging the frequent use of various animal butters in Epiphany’s dishes). As developing food writers, the students of Dr. Cardon’s class had the opportunity to taste a selection of dishes on Animal Butter’s menu-in-progress. 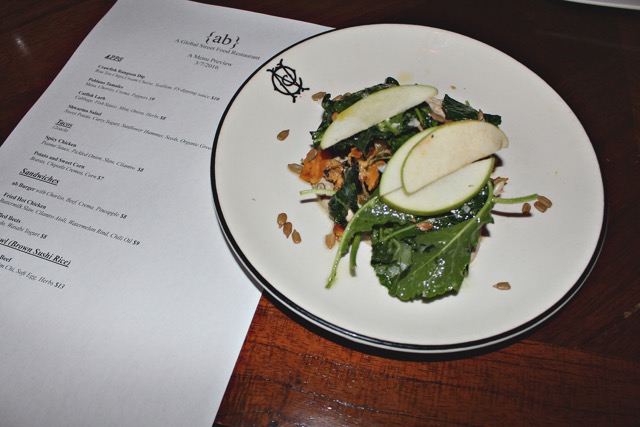 The food (as well as its very reasonable pricing) seemed geared toward a much more casual atmosphere; the menu boasted tacos, tamales, and a hamburger, although all were presented in creative and elegant forms. We were treated to ten dishes, all providing their own combination of cultures and flavors.

The set of appetizers included sweet potato shawarma salad, crawfish rangoon dip, poblano tamales, and catfish larb. The shawarma salad was an instant favorite with several students, including Yasmeen Sayyah, who described the “balanced, harmonious effect” created by the “sweetness of the sweet potatoes blend[ing] nicely with the richness of the tahini [dressing] and contrast[ing] the bitter greens.” The bright and flavorful crawfish rangoon dip was also a hit, as Taylor Sheeran called it “a combination of all the best parts of buffalo chicken dip, queso, and crawfish rangoon.” Perfect for sharing, the sheets of wonton provided an ideal boat for the spicy, creamy dip loaded with crawfish chunks.

The tamales were soft and smooth, with flavor punctuated by chipotle crema and a dark, spicy sauce. The larb was one of the mores surprising dishes: the “cheerfully golden” catfish, plentiful onions, and vegetables were served next to a “neat pile of purple cabbage,” ready to be wrapped up and consumed in a burst of fragrant vegetables. 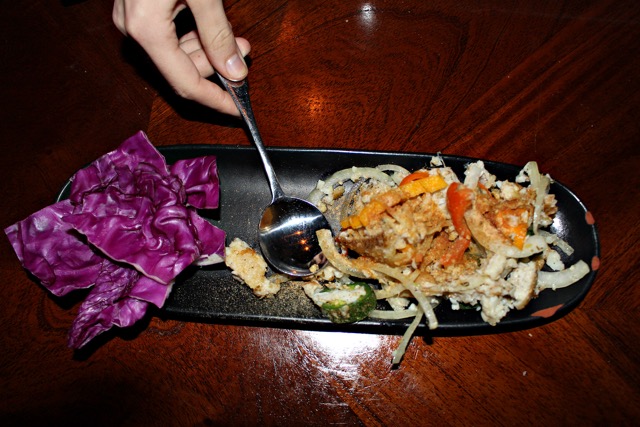 Already beginning to feel full, we bravely gulped our water and began preparing our palate for the upcoming feast of tacos and sandwiches. Mallory Richards was immediately floored by the “absolutely stunning presentation” of the potato and sweet corn tacos, noting that “the bright colors of guacamole and corn offset the charred potatoes, just as their many flavors compliment one another.” There was some disagreement over whether the spicy chicken tacos deserved their “spicy” moniker; Kaitlyn Corum observed “plenty of heat in the crispy chicken and sauce,” while Jared Powell felt that the “buttery peanut taste” neutralized most of the spice. However, everyone seemed to agree that spicy or not, the tacos were delicious.

Barely finished with our first fried chicken dish, we were quickly met with another. The fried hot chicken sandwich “offer[ed] a variety even in its crunch,” with juicy meat and fresh vegetables mingling between beautifully soft bread. In case we were getting too comfortabe with comfort food, though, this greasy delight was followed up by a grilled beet sandwich with avocado and mint. While some were apprehensive about the earthy purple slab of beet confronting them from under the thick bread, Yasmeen lauded the “deeply flavorful [root], enhanced by being lightly cooked,” even removing the bread to more fully enjoy the dynamic flavors. 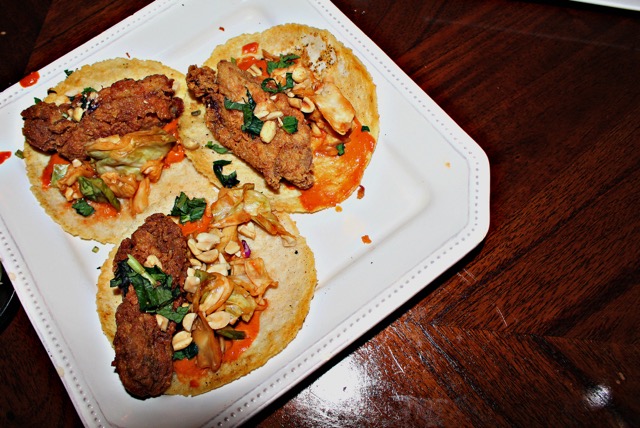 As our stomachs cried for relief and our taste buds cried for more, we examined the final two dishes with glee. Annemarie Lisko‘s luscious description of the burger focused on presentation and flavor: “a hint of just-melted cheese slips from the edges as the beautifully fresh and golden bun reveals the dark brown beef and chorizo—crowned with a ring of warm pineapple—within…The diverse tastes—deliciously smoky meat, delightfully sweet pineapple, and richly crafted bread—combine into a magical array of flavors.” Finally, the rice bowl contained what Kaitlyn called “a chaos of vegetables, slices of beef, and an egg ready to drizzle golden yolk over simple white rice.” A wild but pleasant combination of textures and flavors brought our tasting to a satisfying end.

Although many of us weren’t convinced we’d ever be able to eat again, we were all certainly sold on the concept and flavors of Animal Butter. Jackson presented international street food in an accessible and creative way, combining cultures and flavors to make sophisticated but universally enjoyable dishes. College students who may be nervous about the beet sandwich certainly can’t complain about a fried chicken taco, and anyone looking for an innovative, fresh, and sophisticated alternative to classic bar food is in for a treat.

Animal Butter is expected to open in late spring/early summer.